The Econic Battle Of Innovation: Behind The Scenes 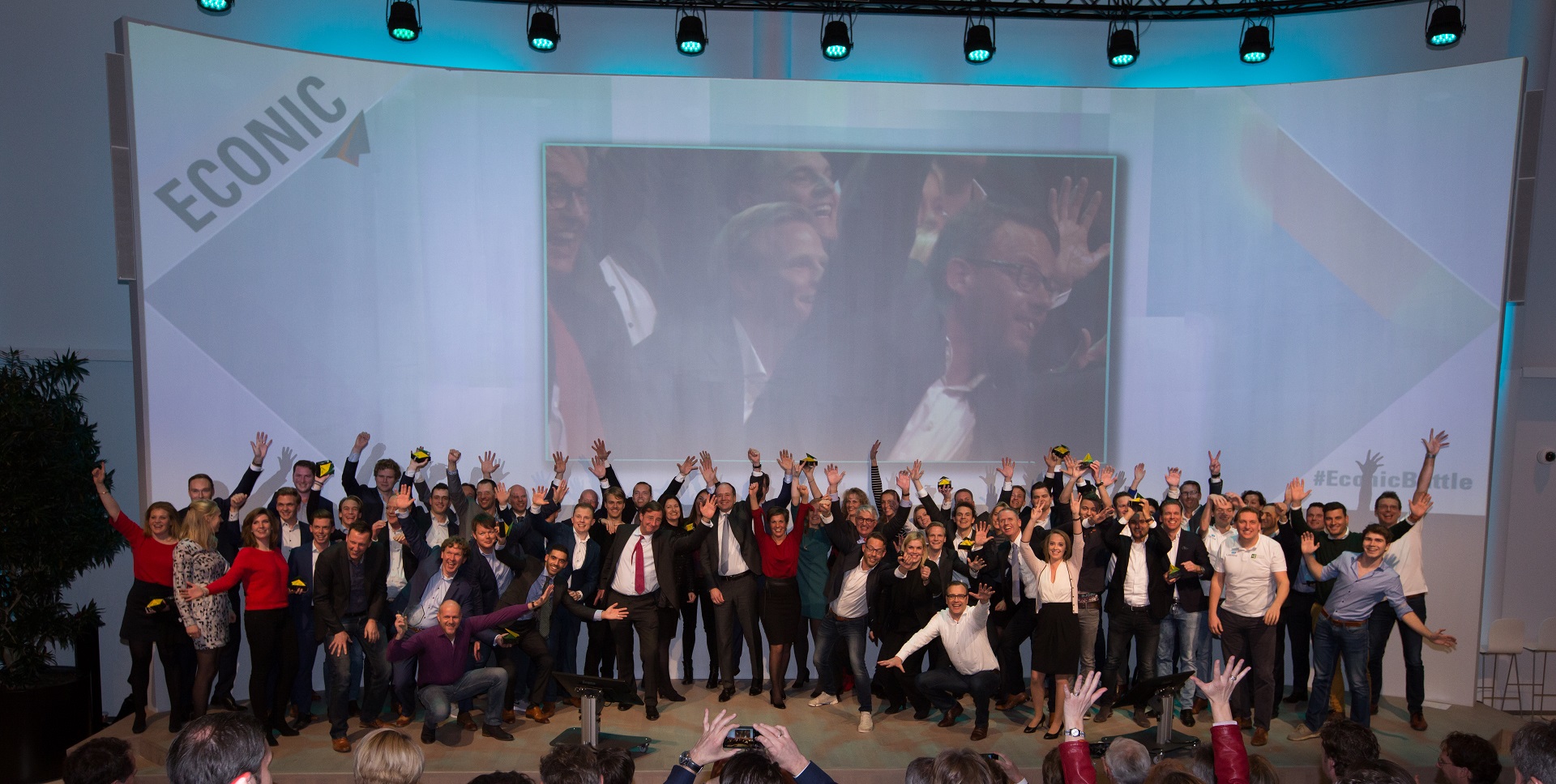 In June 2016, ABN AMRO and HighTechXL teamed up to build an “open innovation ecosystem” for the bank – Econic – and now, only seven months later, we present the first results of our collaboration efforts. It’s hard to convey the experience of being present at the Econic Battle of Innovation in mere words – a 360° video would do it more justice. This article takes the audience behind the scenes of the preparation and event itself, where between the lines, we see a shift in organizational culture start to take place.

In June 2016, ABN AMRO and HighTechXL teamed up to build an “open innovation ecosystem” for the bank – Econic – and now, only seven months later, we present the first results of our collaboration efforts. It’s hard to convey the experience of being present at the Econic Battle of Innovation in mere words – a 360° video would do it more justice. This article takes the audience behind the scenes of the preparation and event itself, where between the lines, we see a shift in organizational culture start to take place.

Thursday dawned crisp and cold. The frost was still clinging to the blades of grass and sparkled in the sunlight as I pedaled my way to the High Tech Campus Conference Center. “Enjoy the sunshine now”, I thought, “because later on you’ll hardly have time to breathe.”Today was going to be a long but rewarding day.

Let’s jump to a few hours later. From my bird’s eye vantage point high up at the back of the auditorium, I felt the energy start to rise as more and more people flooded the room and took their seats. A Tarantino-style video with the presenters’ portraits played on the 10-meter wide screen above the stage.

Then the voice-over started, and a shiver ran down my spine as the 300-member audience watched the introductory video. It became immediately clear to me what the day was about.

Fear. Disruption. What does the future hold?Innovation. The holy grail. The key to survival.People pay lip service to innovation all the time. They make speeches. They do research. They write policies.For what?! We can only hold our finger in the dike for so long..Don’t disturb the peace. Don’t ask questions.But we… we dare. To ask questions, to believe we have a better way.Innovation is not a policy. It’s a battle. We beat you up, and knock you down. But then we pick you up again, and make you fly.Innovation is a battle. And everyone can fight.

And fight we did. A total of 20 teams were represented on stage in the course of the afternoon, battling it out for a spot in the next phase of the innovation programs. If it’s possible to “own” the stage in the figurative sense of the word, then that’s what the teams did. They practically radiated confidence and conviction.

But they didn’t start out the program looking like that. When the ABN AMRO employees arrived at their first “ideation sessions” a few months ago, they still looked and spoke like typical bankers. Their suits were pressed, and their high heels made clacking noises on the floor. They glanced at each other dubiously when they heard that the session was going to be in English, of all things.

But the more time they spent at Econic, the more they loosened up. They started to wear jeans and tennis shoes. They hung around with us after 5PM and drank a few beers. They started to make jokes. In short, they began to enjoy themselves. But they also quickly realized that innovation is serious stuff, and that they had a lot of hard work to do.

Despite our descriptions of what the event would be like, the teams still had no real idea of the magnitude of the event until the day itself. As they walked into the conference center auditorium for final rehearsals and saw the stage and heard the music, their jaws dropped and many started secretly wishing that they’d practiced a bit more.

After rehearsals, it was a final frenzy of makeup, hairspray, and nail polish in the women’s restroom, and I caught a couple of the presenters pacing the hallway staring into space as their lips rehearsed their “pitch” word for word.

With the program team, we set up the teams’ banners and made last-minute checks, double checks, and triple checks. Just a few more minutes and the show was on.

The cultural change that HighTechXL is helping ABN AMRO to bring about among its employees is already starting to translate into tangible results for the bank’s business. The bank took a big step forward on Thursday in the announcement of their collaboration with six external startups in the Econic Launchpad program. By working with external innovative companies, ABN AMRO can offer new products and services to its clients.

InvoiceFinance: Through InvoiceFinance, ABN AMRO can help their clients to take control of their cash flow by paying their invoices for them as soon as they’re sent. The solution has already proven to generate business for the bank: The collaboration has been tested with six client managers within ABN AMRO, with many of the cases resulting in loans.

Golden Egg Check: Through their software platform, Golden Egg Check offers ABN AMRO the possibility to predict how successful a client organization will be. The company’s toolset also enables ABN AMRO relationship managers to ask clients the right questions, and understand the context and availability of relevant insights.

ESI (Expat Spouses Initiative): Econic has announced a partnership with ESI, a talent networking organization for internationals. Through this partnership, Econic will be able to source international talent for their teams, projects, hackathons, and other events. The two organizations will rely on the power of each other’s networks for future collaborations.

Amber Mobility: Amber Mobility is helping ABN AMRO to achieve its goal of becoming climate neutral by 2020, by analyzing the mobility behavior of the bank’s employees and providing a Corporate Mobility service that optimizes on sustainability, efficiency, time and money.

InvoiceSharing: InvoiceSharing allows ABN AMRO to provide a simple and affordable invoice digitization solution for their clients, along with valuable advice via data-driven insight. On the collaboration roadmap, one ABN AMRO client is already impatient to use the service, and five more clients are lined up to start in January 2017.

A joint ABN AMRO and HighTechXL* initiative, Econic is an open innovation ecosystem that accelerates innovative ideas coming from both outside and inside the bank. Here, the best of the startup and banking worlds meet to create exciting new possibilities.

Econic is an open innovation ecosystem, which means that it has two “innovation routes”: Inside OUT, and outside IN. In the Inside OUT route, ABN AMRO employees are empowered to generate and drive ideas within the bank in what’s called the Econic Innovate ABN AMRO program. Successful teams are coached through all four phases of their development, and receive full support from ABN AMRO. In the Outside IN route, external fast-growing companies (scale-ups) are selected to join the Econic Launchpad program. In this program, ABN AMRO develops collaborations with the external companies, usually in the form of products or services that ABN AMRO can offer to its clients. The bank serves as a base, or platform, that provides structured access to the industry, expertise, and network, in order to “launch” the scale-ups’ business development. It’s a win-win for both ABN AMRO and the scale-ups.