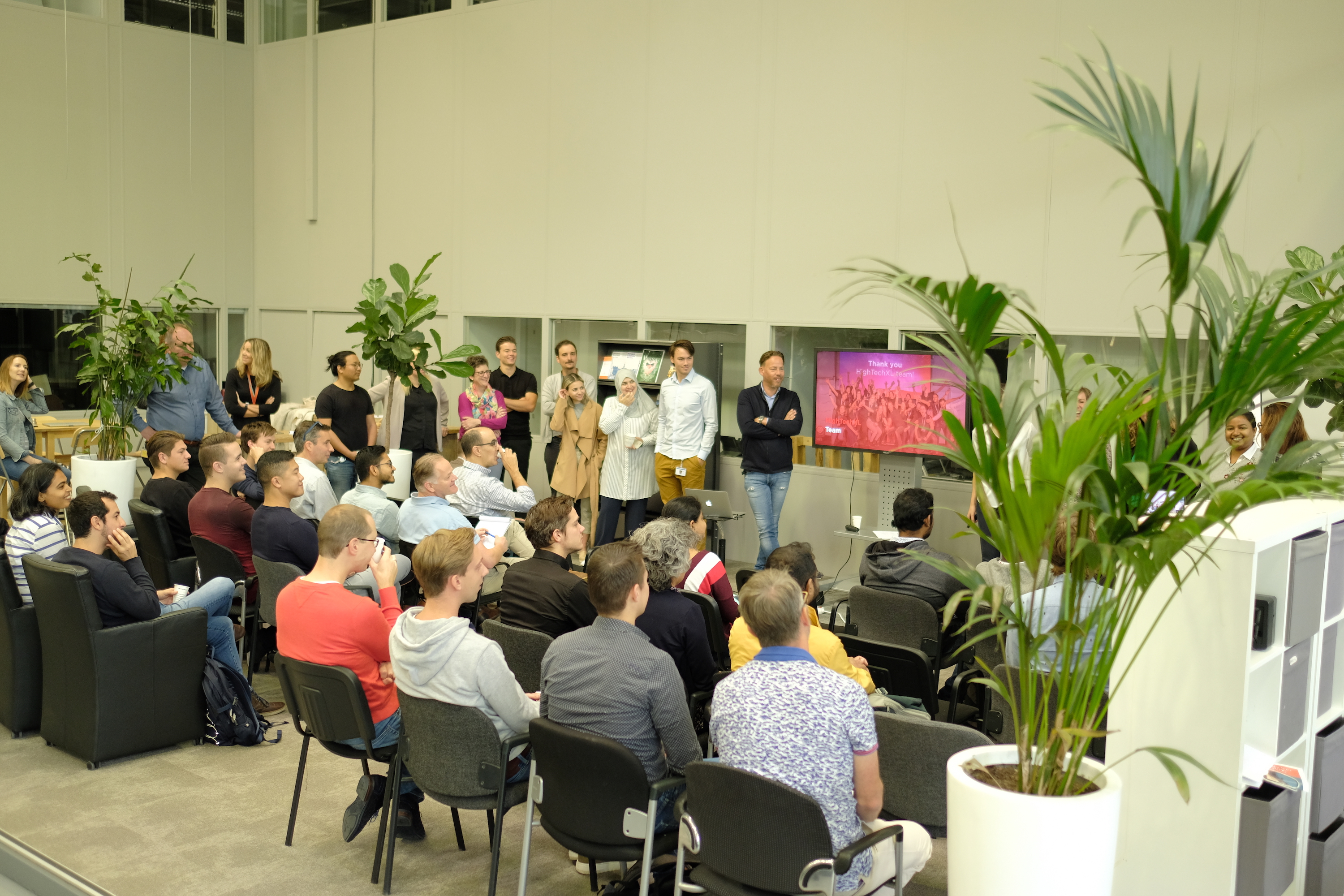 HighTechXL’s second deep-tech venture-building cohort has launched with two intense days on 17 and 18 September. The clock starts now as the nine-month accelerator phase began with a structured sequence of brainstorming, 1-on-1 coaching, expert sessions and pitches.

“From a stressful chaos to a controlled environment,” added Johan Kortas, Burke’s Project X teammate as the team pondered a late night of meeting deadlines for deliverables.

Project X, which is working with neurofeedback technology developed by Philips, is one of six new HighTechXL teams beginning the accelerator, along with two cohorts from a previous venture builder program, Carbyon and inPhocal. Carbyon and inPhocal are two ventures that have completed Phase 1 and are in Phase 2 of the program, which they entered in April.

This multi-phase acceleration/venture building process started with a FasTrackathon reverse hackathon on 26 June at HighTechXL.

More 70 people who came to preview technology from CERN, Philips and TNO have been pared down to the 30 who started the accelerator on 17 September in HighTechXL’s offices in Building 27 on High Tech Campus.

HighTechXL stresses diversity in all areas, including gender, age and culture, and teams include people from all disciplines and all walks of life. The Project X team is both representative of that diversity and outstanding in its depth of talent.

• Bert-Jan Woertman is a psychologist by training, a social innovator and one of the Netherlands’ Top 50 Future Makers.

• Han Dirkx is a serial entrepreneur-turned-artist-turned-entrepreneur

• Colin Burke is an engineer and entrepreneur

• Johan Kortas is an industrial scientist

• Jur Vellema is an orthopedic surgeon

• Karim Elmorsi is a former Philips IT director, Mergers & Acquisitions

• Folkert Huysinga is a former team performance facilitator at Philips

“They’re here for two days, and that’s when they really start,” Palmen said. During an intense 48 hours, teams go through program onboarding. They pitch about what they researched in the pre-program and they do matchmaking with corporate talents, Emma said.

The ideas and approaches are starting to coalesce.

Bert-Jan said at this point, his team is sticking with Project X on the way to a formal name: “We don’t want to be stuck with a name because we don’t know at this point what the final concept will be. The name needs to fit with the company.

Philips developed a system of neurofeedback that measures signals from brainwaves. The Philips neurofeedback technology uses music to indicate how relaxed the user is. The deeper the relaxation, the clearer the music.

When you read and listen to music, it enhances cognition, which their technology can measure, said Colin Burke – a technology that works for everyone.

Stay tuned … we’re entering the business modeling and validation phases as the process is just beginning. The teams that survive make their debut at XL Day, scheduled for 13 December.