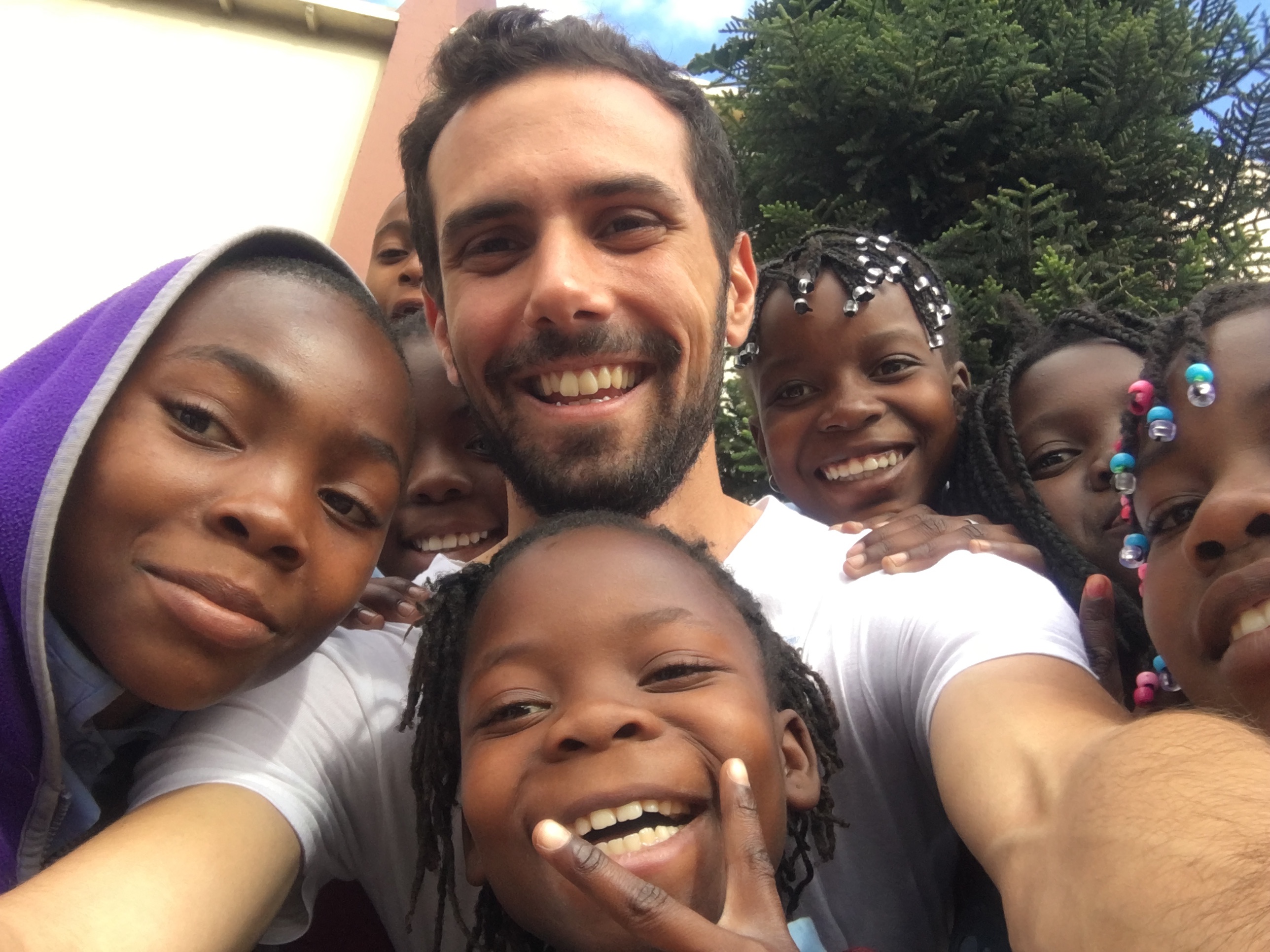 There are lots of ways to measure success. With a startup, it’s about deliverables, revenue and market penetrations.

But for HighTechXL’s Luis Oliveira, the measure of success is how much you can change people’s lives. Not just change, but improve.

When he’s not an acceleration manager for the Netherlands’ premier high-tech hardware accelerator, Luis is a volunteer with Engineers Without Borders International. EWB members work across the globe to help disadvantaged communities improve residents’ quality of life through education and sustainable engineering projects.

Full disclosure: Luis isn’t actually an engineer. He’s an M&A guy. “That’s a curious thing,” he said, smiling. “I’m probably the only person in Engineers Without Borders who’s not an engineer, but they accept me since I have experience in finance, and I work for a high-tech accelerator.”

Even before the 27-year-old native of Valença, Portugal joined EWB, he had traveled twice to Angola, another developing country in southern Africa where Portuguese is the main language.

This past summer, working in a partnership with AVSI, a non-profit humanitarian project, Luis set out to take his organizational skills, financial knowledge and tech savvy to a school in the Mozambique capital of Maputo that sorely needed him.

The EWB initiative in Mozambique is Schools of the Future or "SOFT." SOFT has 15 other team members based in Eindhoven. It's not only Portuguese speakers, it's also other nationalities, including Dutch, Spanish, Italian and others.

“We only start a project when someone asks us for help, and (AVSI) requested help for this project,” he said. It was a month-long project with 10th-graders at a high school, and Luis was volunteering for two weeks.

In touch with AVSI officials via Skype, they told him he was going to one of the poorest neighborhoods in Maputo. Escola Comunitaria de São Joaquim, Maputo has many challenges. “Most of the people are poor … really dysfunctional families, almost all of them,” Luis said.

To reach the students, he’d have to overcome not just time and distance, but poverty and cultural norms. As far as winning trust, that’s Luis’s comparative advantage – his personality is an unusual mélange of easy-going and intense.

“The idea is, we bring to students new things about engineering so they get interested in the field and understand how stuff works,” Luis said.

So he and the rest of the Schools of the Future team started immediately mapping out the curriculum, preparing manuals for students and tailoring the lessons to the reality there. And the reality was, the classes would have to be limited.

It was impossible to get to all the students, so the SOFT team created a pre-selection test for more than 200 kids, out of which 30 students were selected. The goal was to find out who was ambitious as well as who had a logical way of explaining what they wanted and why.

“The analytical part was just to get a feel for their skills, which were quite low,” according to Luis.

One of the skills most lacking in Mozambique is engineering. The majority of students fortunate to go on to university follow law, finance or accounting. “They supposedly have engineering, but we tested our materials on fifth-graders in Netherlands, and students at Escola Comunitaria de Sao Joaquim were 10th-graders."

The average score in Maputo was 50 percent. “So you can see the difference is quite big.”

On the ground, Mozambique was another world … the Third World, with all the problems and challenges. Maputo’s infrastructure turned out to be a bit better – “or less worse, let’s say” – than Angola, according to Luis.

But in the end, he says, people are people:

“The students are normal people. It’s not a question of intelligence; it’s the conditions. If I compare the school I was in, it was much worse than all the schools I’ve been in. It was 50 years behind. That was the main shock."

His students were from impoverished, dysfunctional families, with a typical household income of 75 to 80 euros per month.

None of that stopped students from embracing the technology and the whole spirit of learning. “In the beginning, they were afraid of presenting their ideas,” Luis said. “By the end, everyone wanted to go to the blackboard and do the exercise.”

• The first week of the month-long project was dedicated to engineering, with Luis and four other team members – Susana Lopes, Celeste Arcos, Manuel Ribeiro and Sara Pereira – teaching the kids to build a simple digital piano, assembling the pieces and understanding what they did.

Next were building a radio and calculator. The idea is to teach the fundamental theories about these three devices, the electronics and physics.

“They were completely amazed by everything. Before they know what’s behind it, they think it’s magic.”

The first segment ended with a science fair when the kids showed off what they’d learned. “That was an amazing part – they knew all the science so well they were able to explain it to others. Even the school principal was amazed: ‘How does this work!’ “ Luis said.

It was a huge success.

Luis worked directly with two teachers, and each was working with 14 or 15 classes from morning to night. That kind of one-on-one attention is far from the norm in Mozambique.

“They just simply say they don’t have time to teach all the curriculum. It was impossible for them to get to all the students in detail."

• The second part of the project, where Luis and his girlfriend Susana had a more important role, was dedicated to helping students with personal finance, exploring what are necessities and what are luxury goods. “Under what are luxury goods? One example I had was having a ticket for the bus. That’s a luxury for all of them,” Luis said.

If they had any money left, they spend it on “megas,” or megabytes of cell phone memory. (Ironically, Luis is working on CERN technology that could solve this problem. Read more about that here.)

While it was important for them to use the Internet, it was eating up too much of their very limited disposable income. Luis was able to get them to agree to try and save 10 meticais – or about 1 euro cent – every day.

“Some of them could, some couldn’t.” As poor as his students were, as urban dwellers, they were still better off than people in rural Mozambique.

One of the most poignant moments was a project with university students which included a trip to remote area to see a solar-panel facility.  Five of his students made the trip, “and it was amazing,” Luis said. “When they got back, they were telling their classmates about the terrible conditions!

“They were surprised – ‘They don’t have anything!’ ”

What Engineers Without Borders brought to Escola Comunitaria de Sao Joaquim wasn’t just knowledge but a vision for what students can accomplish. WEB encourages bright kids to aspire to uni “because it’s important not just for them, but for the country,” Luis said.

When it was time for Luis to leave, there were a lot of tears.

“I gave a closing speech and told them how I believe in all of them, that they could go to university and have great lives …  ‘that speech.’ 'They came to me, Luis, we’ll really miss you.' "

Well, not that long. He’s headed back to Mozambique next year with even bigger plans:

“There’s lots we can improve significantly to make an even bigger impact next time.”

And he’ll have more resources.

The Schools of the Future project just received funding from the ASML Foundation that will for sure contribute to the sustainability of the project for the next 3 years.

Finally, Luis and his girlfriend are sponsoring a child through an aid agency, getting frequent updates about her. “We know she’s in good hands.”