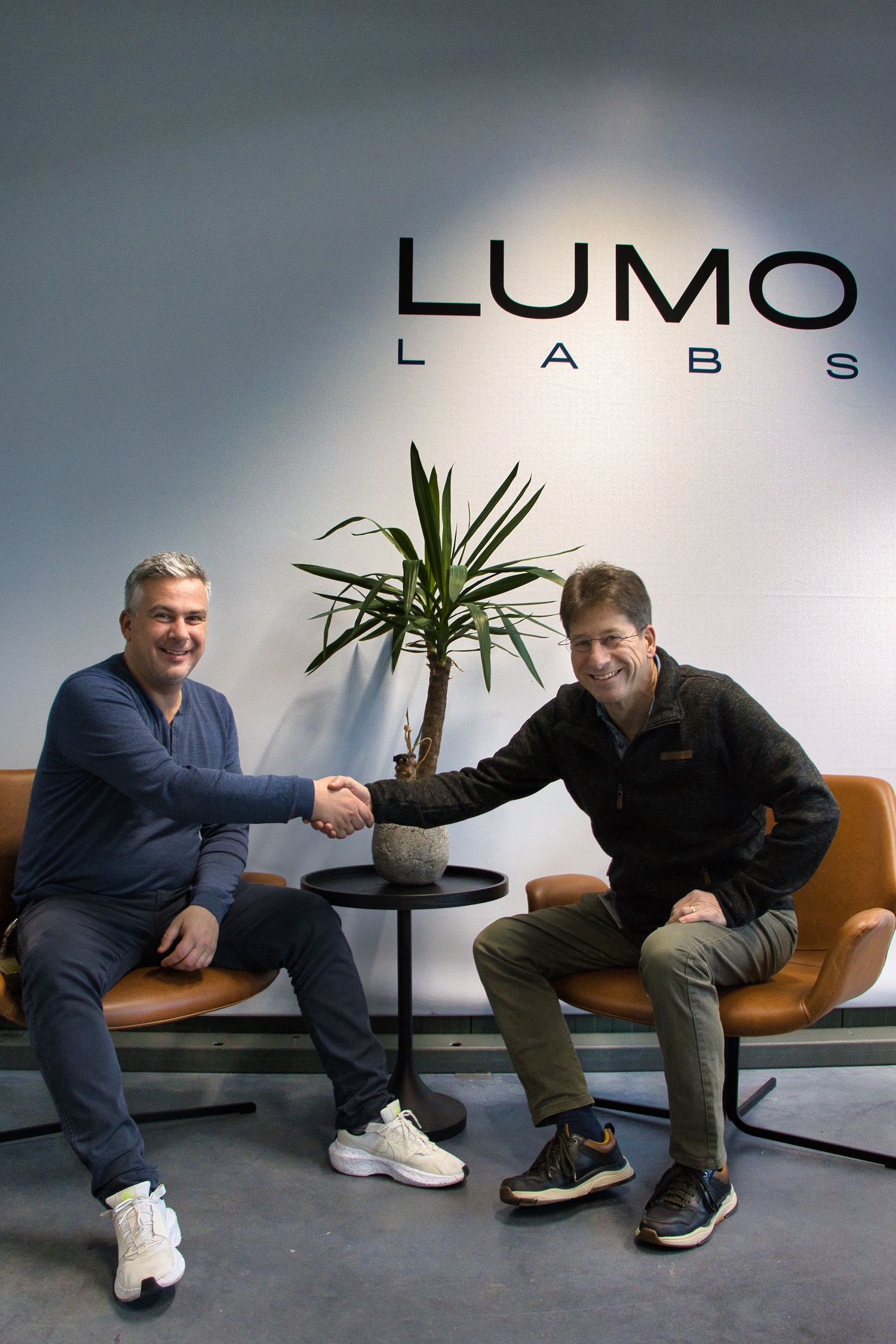 This article was published on the High Tech Campus Eindhoven website December 15, 2022 and is published here with their permission.

Two venture builders on the same Campus. Is that a good idea? Will that foster greater competition or collaboration?

HighTechXL is Europe’s only deep-tech venture builder. LUMO Labs is an accelerator and venture capital firm. Both work with impact startups that follow the UN’s Sustainable Development Goals. The question remains: is High Tech Campus Eindhoven big enough for them to co-exist? And how? We asked them ourselves.

“The Campus in itself is a great physical place for startups and scale-ups and fostering open innovation.”

The HTCE approach is open innovation, so competition and collaboration aren’t mutually exclusive. And this sentiment is also evident among startup gurus John Bell, CEO of HighTechXL, and Andy Lürling, founding partner of LUMO Labs.

Alphabeats is the proof of that. Founded as a HighTechXL startup in 2019, Alphabeats went to LUMO Labs in 2020, where they received funding and joined the venture building program. Then, in 2022, Alphabeats got a 1.5 million euro investment from DeepTechXL, created by HighTechXL founder Guus Frericks, which included follow-on investment from LUMO Labs.

All this happened within a few hundred meters, with HighTechXL and DeepTechXL both in HTC 27 and LUMO Labs in HTC 6a.

The Alphabeats deal was the first inkling that you guys were more in the collaboration mode than the competition mode, although there will be times when you're going after the same teams.

No, no, no. So, I want to say something about this. In the past, people sensed there was competition, but we didn't. We see it as a very logical, complementary overlap, and you need to overlap. So, our relationship is very positive. Competition strengthens each other. So, we start a company and you (LUMO Labs) pick it up later.

It’s good to have some overlap or else you can’t collaborate.

Next question… would you recommend each other to startups?

Of course, yeah, I do this regularly.

I would say in the beginning, it happened frequently that companies came to us and didn't know what exactly we were doing. Now, because of our focused communications and online presence, 92 percent of the decks we get are really on target. The hardware propositions, they don't come to us anymore. I wouldn’t say we “sell” HighTechXL, but we certainly refer to them.

Is it possible that a company could go from HighTechXL to LUMO Labs, then back to HighTechXL?

Yeah, here you see Alphabeats. Alphabeats is a very nice example. They started at HighTechXL. So, they launched after going through our deep-tech venture building program. Then LUMO Labs brought it a bit further and then DeepTechXL came in. So, now we can go a little bit bigger. Andy stayed in (the latest investment round). It’s a nice example of how the ecosystem can work.

And that will be mainly with AI, because the hardware part … we don't do that. And the rest is ecosystem-building.

We started, of course, pretty early on with the United Nations Sustainable Development Goals. And about a year after that, you (HTXL) also started to focus more on impact. Even though the SDGs are maybe not the same, the process you use now is similar to LUMO Labs.

And that's the most beautiful overlap … that both venture builders are building impact startups. Both think that everybody benefits. Let’s see how we can strengthen each other there.

Here’s another example. Recently, I was in a call with the Unknown Group in The Hague. They are now setting up more or less the same model in the Titaan building. So, what you see is that we are not alone anymore. That's a good thing!

In this period when there just isn't enough talent for the startups out there who are really promising, two venture builders working together makes this a more attractive Campus. This just offers people more opportunities. They can come start with you (HTXL) and go to you (LUMO Labs). In most cases like this, research centers aren't open. Here, companies are talking and collaborating.

Yeah, I brought up this question recently to the Minister of Economic Affairs. We hosted a minister recently, and there was a consultation meeting with startups, big companies and healthcare companies. So, three groups with different issues being discussed. If the government can prevent that we compete in this small country, that makes it so much easier to take away some of the burdens, including visas for internationals.

A visa for a person coming from outside of the EU is only good for three months. A visa is very difficult to get in just three months. We need to make the Netherlands attractive to other countries and other regions in the world. Because based on the weather, we will not win.

All this is, ultimately, for the greater good of society – solving these societal challenges – and you both use the same messaging about financial return, social impact and pulling together all the players to push these startups out to the world.

So, it's not only Eindhoven. Eindhoven is a Triple-A location because we have a larger pool of people and startups in the neighborhood to choose from. That makes our work a bit easier.

That might be different than what you're looking for, because I don't want to be seen as only Eindhoven. We’re in the Netherlands, which is great. But we are here to stimulate entrepreneurship and to create solutions to solve societal challenges. These are global challenges that require global collaboration.

But you need a brand.

The good part about Brainport is that we have Philips, Signify, ASML and NXP and the bad thing about it is that we have them. Because of those big four, there’s less light on HighTechXL, LUMO and, most importantly, the startups. I'm pretty sure that if you go now to a typical VC in Silicon Valley, we have higher recognition as a brand being LUMO Labs, being HighTechXL than being Brainport or Eindhoven. And I’m sure that in certain circles, LUMO Labs is better known than ASML. And the same for HighTechXL.

And for the people who say, ‘We are mentioned in the Eindhovens Dagblad right alongside Phillips and ASML!’ I say, “This is exactly what's wrong with this region.”

The press should shine the spotlight more on the startups and their founders – background stories, what drives them – and share the successes as well. This in addition to the news around Philips, ASML, etc. This will have a positive effect on the startup ecosystem and will even make the total ecosystem healthier.

We – HighTechXL, DeepTechXL and LUMO Labs – are the facilitators for the real heroes: the startup founders.

There’s always something about proximity, physical proximity. We know how that works. So, if you just go five kilometers from here, I can't see you anymore. We can't touch you. And so, the Campus in itself is a great physical place for startups and scaleups and fostering open innovation.