Guus Frericks: 'HighTechXL is leaving behind cute tech for the deep tech that defines Eindhoven' 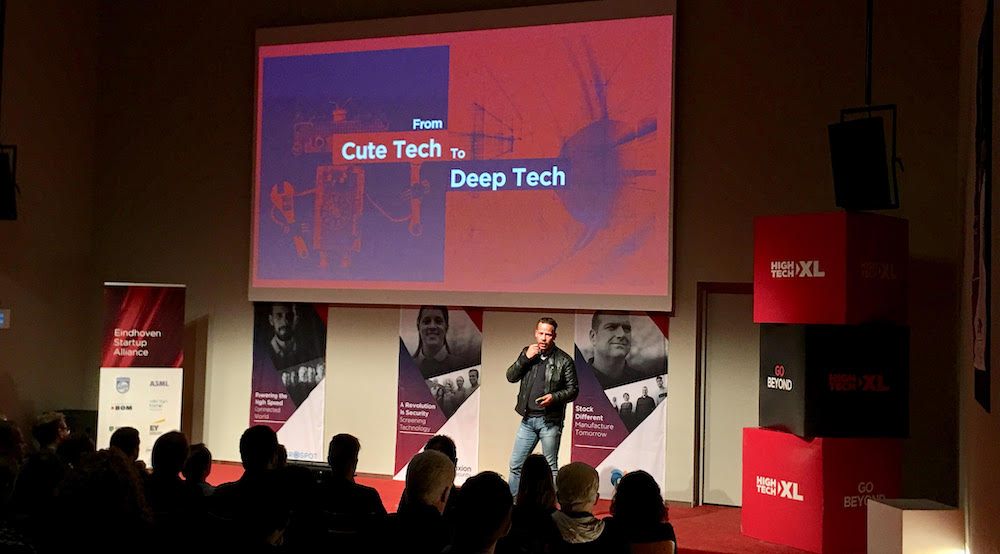 After five months working to bring CERN technology to market, Eindhoven-based HighTechXL revealed the results ... and a dramatic shift in the 4-year-old tech accelerator's mission.

You can see details here about the new companies' presentations, formed around new CERN technology. First, about that pivot announced at Monday's XL Day, an invitation-only event in the Philips auditorium on High Tech Campus Eindhoven.

"We are making some radical changes, moving from cute tech to deep tech," said HighTechXL cofounder and CEO Guus Frericks told the 150 invitees in the audience. "Cute tech is, 'I have this wearable thingy and it connects to my smart phone through my Bluetooth,' " he said. "That's nice, but we want to conquer the world."

Moving from "cute tech" to "deep tech" means leaving behind interesting ideas that might make good businesses but have no relevance to Eindhoven's unique position as a deep tech innovation hub.

Frericks used the example of Applied BioTech, a Mexico-based HighTechXL alumnus recently awarded one of Mexico's top startup prizes for its work using the capsaicinoids from red peppers to produce bio-insecticides and insect-proof coatings.

"Moving forward, the only thing we're going to do is work on is technology where we as a region can make an incredible impact and a difference. And that's what we call deep tech."

HighTechXL will no longer be a "default" for startups with promising technology using lean startup methodology of identifying a problem or pain point in the market, then working backward to develop a product, he added. Instead, the accelerator will start with ground-breaking technology, then build businesses around it.

"We're going to take breakthrough technology, then we're going to look for big problems in the world and see how we can address those problems by creating really disruptive companies."

HighTechXL has a new directive, he said: "Why should we work on the easy stuff when we can work on complicated problems that matter?"

This "new journey" began in the first quarter of this year when HighTechXL struck a deal with CERN, ASML and Nikhef to start bringing select technology to market from CERN's famous linear accelerators, particle colliders, labs and research centers in Switzerland.

That was followed by a CERN Hackathon last July. In September, the founders formed teams to begin the HighTechXL accelerator. Since then, teams have formed, collaborated, hit dead ends and some founders left. "We formed teams with people who didn't know each other, and there were a lot of discussions and teams blowing up," Frericks said.

In the end, five viable business ideas have emerged:

HighTechXL also worked with corporate teams developing new internal concepts, but those projects involve proprietary processes and the information is not released publicly. For  XL Day, DSM and DFE Pharma had corporate innovation teams present. In addition, HighTechXL launched a new entrepreneurial talent development program with ASML, who had employees in the accelerator with their own assignments but also were placed on CERN startup teams.

The five new companies will push ahead toward HighTechXL's Beyond Tech Conference. "We'll put them on stage April 11 ... if they're still alive," Frericks said.

ABOUT THE GROUPS INVOLVED IN THE CERN TECHNOLOGY KNOWLEDGE TRANSFER EFFORT

Based in Geneva and funded by 22 member nations, CERN administers a number of research centers and projects, including two linear accelerators and several colliders, including the Large Hadron Collider. But it’s in the medical technology domain that physics research, including the work done at CERN, has had a major impact, with magnetic resonance imaging, positron emission tomography and other technologies. “People think we’re mostly physicists, but the truth is, CERN is the biggest machine in the world,” said Bilton. “Most of the people who work there are engineers and technicians we need to keep it running.”

In 2012, CERN adopted CERN Easy Access, a technology transfer initiative to make it easier for businesses and entrepreneurs to access intellectual property generated by its researchers.

The National Institute for Subatomic Physics, or Nikhef, is based in Amsterdam. Nikhef is the Dutch organization that carries out research into the elementary building blocks of our universe, their mutual forces and the structure of space and time. Nikhef partners with CERN on the Nikhef-CERN Business Incubation Center.

HighTechXL is the Netherlands’ premier high-tech accelerator, focusing mostly on hardware since its inception in 2014. HighTechXL is an initiative of the Eindhoven Startup Alliance with ASML, Philips, NTS group, High Tech Campus Eindhoven, ABN AMRO Bank, Brabantse Ontwikkelings Maatschappij (BOM), EY  and HVG as its members.