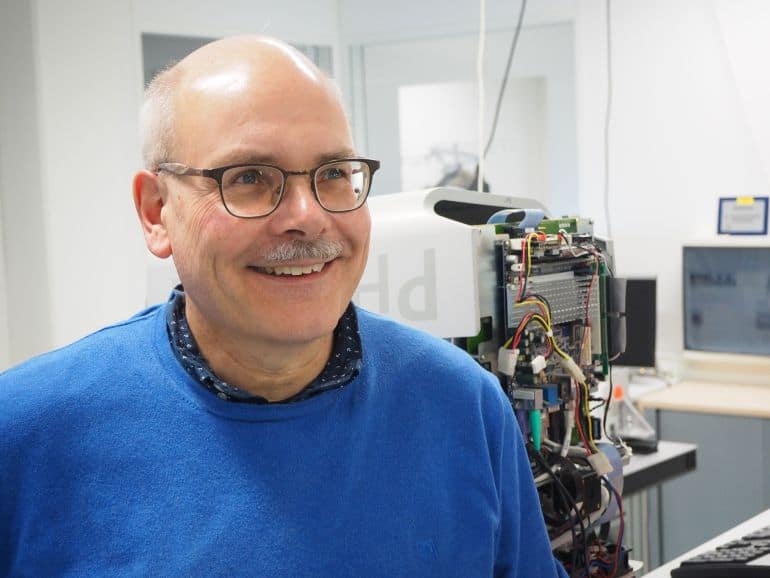 A tech legend and local innovation rock star is leaving behind his corporate career to focus on startups at HighTechXL.

Though really, it’s more profound than that … Eddy Allefs is committing most of his time to working with startups after having been involved with HighTechXL since its founding as Startup Bootcamp in 2015.

As of 1 April, 2020 Eddy is HighTechXL’s Chief Technical Officer, though he’ll keep his connections to the Dutch high-tech industry corporate world via NTS-Group, where he remains a development and engineering innovation consultant for technology, people and business.

At HighTechXL, he is part of the three-person technology team identifying and assessing innovations from the world’s biggest research labs and tech companies, then building teams around that tech on the way to taking it to market. He’s also part of the vetting process, deciding which new teams coming out of FasTrackathon hackathons make it into the nine-month accelerator program.

Eddy brings to HighTechXL a life-long curiosity about new technologies and a willingness to challenge the status quo. “Those are qualities you need for the startup life, right?” he said.

Though not so much for the corporate world, which for Eddy is sometimes too slow, and where one always has to colour between the lines. He has seen examples in his career that great technology stayed on the shelf because there was no marketing behind it. “Does not make sense to work on the technology, if one forgets to sell it.”

In a corporate, new technologies that trigger the attention of potential customers could even lead to internal power plays as to who owned it, and by the time those disputes were resolved, “the customer was gone already.” Too often, internal processes became corporate obsessions in and of themselves rather than the means to expanding market share. “That frustrates me, so I always challenged those systems,” he said.

Those entrepreneurial traits brought Eddy to the attention of a group in Eindhoven working to create a high-speed innovation environment … a startup accelerator.

Edwin de Zeeuw, the brother of a Startup Bootcamp co-founder, told Eddy he’d noticed Eddy is a kind of business-oriented technical manager. “Edwin told me, ‘We’re going to start something new – Startup Boot Camp. You need to be there as a mentor and help start it.'"

Edwin’s brother, Patrick de Zeeuw, introduced him to Guus Frericks and others at what is now HighTechXL, “and I never left,” Eddy said. “I’ve been in the startup culture for seven years, so it’s part of my life now. In that sense, the change to HighTechXL is not a big step for me.

At the time, Eddy was still working at ASML, the company behind the deep-tech photolithography that makes possible the semiconductor industry.

His typical day included the multiple meetings, the PowerPoint presentations and the Excel spreadsheets that, to a large extent, define the corporate life. But unlike other execs, at the end of the day, he’d jump on his scooter and on his way home stop at HighTechXL. Then make it home about 7 or 8. “I had to explain to my wife that I had a second fun job next to my regular job.”

That story still goes around HighTechXL, he said:

"There’s Eddy with his scooter. It must be 5 o’clock."

Eddy says he and Guus are complementary to each other have something of a symbiotic relationship: Guus, the hard-driving CEO and founder and Eddy, the tech-freak and pragmatist with people skills.

When Guus raises the bar for his startups, “he places it at least one meter higher,” Eddy said. The difference between him and Guus is that if there's a stumble, Eddy looks team members in the eyes to see whether he sees energy and drive, or fear. While Eddy won’t lower the bar, he’ll try to figure out what’s keeping the startups from performing, then help them jump over the bar the next time.

Oh, and if you’re thinking about joining HighTechXL (and you should) you’d better have a considerable amount of drive to keep up with him. “I’m 58 years old, and I get the message from people age 3020 that I’m going too fast for them.

“By nature, I’m impatient, that’s true. When I was a child, when 80 percent of the people turned right, I turned left to see what would be there.”

A multitasker, Eddy also is coordinating the Dutch Corona Mask Initiative, an effort he created just a few weeks ago. That initiative brings together manufacturers and engineers to create a manufacturing facility that will produce 200,000 masks per day that can immediately go to healthcare workers on the front lines of the coronavirus pandemic.

More amazing Eddy Allefs facts you may not know:

Eddy brings decades of corporate contacts to HighTechXL as well as an insider’s understanding of what technology some of the most advanced companies in the world have sitting on their shelves … technology they might be willing to help HighTechXL take to market. He also maintains contacts with startups that didn’t make it into HighTechXL in the past but have matured into viable businesses and now might be ready.

Eddy also is a pro networker, often sitting on the couch at night with his wife “watching TV.” Which is code for scanning LinkedIn for the latest technologies and connecting people in the Eindhoven ecosystem.

There’s No Room For Egos: How to “de-risk” your startup by building a high performing team

Eindhoven startups benefit from HighTechXL's first Give Back Monday