CERN at HighTechXL: More adventures from the lab to the marketplace 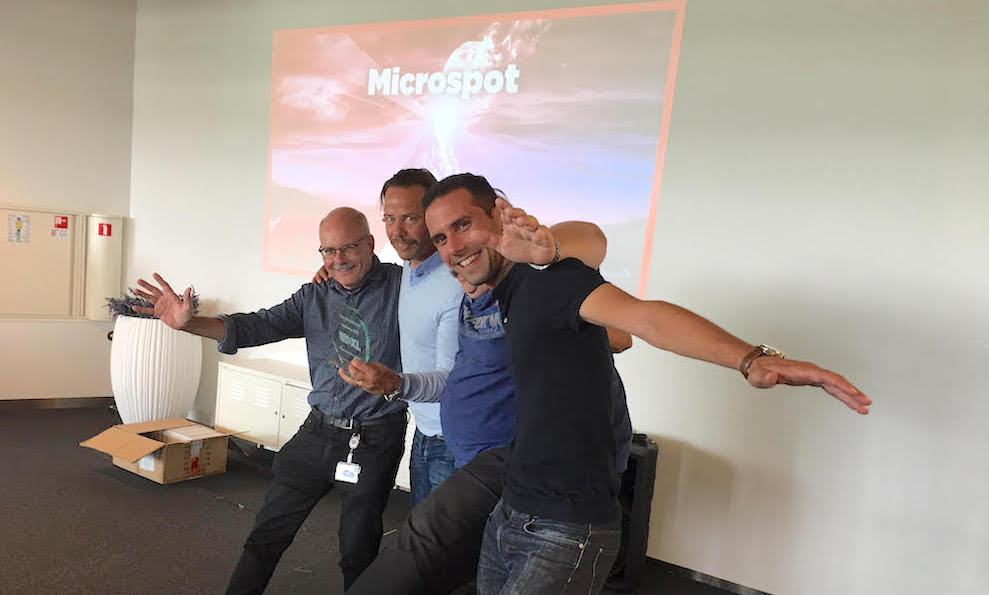 • CERN knowledge transfer efforts provide a unique opportunity for high-tech industry experts who have ever dreamt of creating their own company – and were waiting for the right opportunity – to instantly become a founding member of five Eindhoven-based startups.

• CERN officials and National Institute for Subatomic Physics, or Nikhef, are teaming up with HighTechXL in a concentrated effort to push research out of the lab to innovators in Eindhoven's high-tech ecosystem.

• The project started last July with HighTechXL’s CERN Hackathon at High Tech Campus in Eindhoven with about 100 techies and startup advisors. (You can read the original post from Dispatches Europe here.)

• Han Dols, CERN knowledge transfer officer, laid out the challenge: “Can we find the technology from physics that can make a positive impact on society?” CERN is best known for particle research using linear accelerators and several colliders in Switzerland including the Large Hadron Collider to find the"God Particle."

Watching engineers, physicists and entrepreneurs turning CERN research into new companies, one can’t help wondering if we're watching history being made. After all, CERN created the World Wide Web.

On Tuesday, HighTechXL took a giant step down the road to turning CERN research from esoteric concepts to essential new products.

They were tasked with taking three CERN open-source technologies to market as high-impact, sustainable products:

A simple, low-cost system and method for generating a structured laser beam that can transmit over large distances while maintaining a low divergence and small central spot size.

In the preceding weeks, some of the hackathon ideas have been refined and reimagined, and at least one completely new effort created.

In the coming weeks, teams will perfect their concepts and add personnel on the way to going to market. They'll also focus on customer validation and initial partnerships.

So, let’s take a sneak peek at the future, a future where:

• CERN’s structured laser beams are used for inter-satellite communication … technology that could make delivery of high-speed communication systems cheaper and available to everyone. What would that be worth? A LOT!

• CERN’s small particle collider disrupts the global healthcare industry, used in a compact device that provides the isotopes needed for PET scans anywhere, even in small hospitals in isolated communities. What would that be worth? How do you put a value on saving lives?

The CERN project changes his tech accelerator's dynamic, said Guus Frericks, HighTechXL founder and CEO. He and his team have gone from coaching startups to actually founding startups based on CERN technology.

“If you look for technology where you expect to find it, you’ll never find something new,” Dols told the assembled teams.

‍Let’s look at the companies at Tuesday’s Impact Final event:

This team is led by Przemek Krawczyk, a professor originally from Krakow. Modular Energies is different from the other teams in that Krawczyk founded it before the CERN hackathon with his own network of physicists and others from Jagiellonian University in Amsterdam.

“We were already working on and off for more than a year before I came to thehackathon. It’s a coincidence this whole thing came up.”

Krawczyk's concept is to use CERN’s portable particle accelerator to build a small plug-and-play device for on-demand production of radioisotopes for PET scans.Typically, those radioisotopes are made by large cyclotrons.

The compact size, safety and low cost of ownership could lead existing facilities to adopt his device, Krawczyk said.

The market is worth an estimated 60 million euros, but is growing 11 percent per year, he said.

Modular Energies is seeking 4 million euros to build their prototype, but Krawcyzk envisions having a Beta version in healthcare facilities within two years.

Dynaxion SQCis developing unmanned devices for soil analysis, said Cor Datema. Datema's team proposes using CERN’s small particle accelerator to analyze soils. Rather than random soil testing, Dynaxion would let farmers to know if soils have the essential elements and minerals in the right ratios for optimal crop production and precision farming. Dynaxion’s tech could be used, for example, to selectively apply insecticides or fertilizers only where needed, even down to a single plant.

CERN’s Dols called the Dynaxion concept “something fresh, something different.”

The growth rate of international trade is slowing simply because of the sheer amount of goods that must be scanned by security, about 80,000 containers per hour.

If Dynaxion BPI can perfect the technology to use CERN’s small particle accelerator on a large scale for greater speed and resolution, they could speedup the inspection process.

Thetechnology could be expanded from container ship ports to airports and mail operations. “The faster we can scan, the larger the market," Decré said.

This will be complementary to fibre optic networks, not replace that technology, Oliveira said.

Named after the coolest planet in the solar system, this team is focused on the proposition that CERN's CO2 cooling technology outperforms water cooling systems, said Yama Saraj. So Neptune is creating the first customizable thermal control system.

"Because everything in high tech is getting smaller, the problem of thermal stability is getting bigger," Saraj said. He used a darts analogy: As the dart board gets smaller, it's harder to hit the bullseye. The current generation of equipment uses water cooling to try to maintain a constant temperature. "For next-gen tech, that's not good enough," Saraj said. "Water gets warmer and warmer, and the result is uneven thermal behavior." CO2 has 20 times better thermal stability with lower energy consumption.

As ASML's Rob van der Werf noted during the Neptune presentation, "Temperature control is easier with CO2 than water. We have no problem cooling. We have problems with temperature control." Eindhoven-based ASML makes room-sized machines that allow companies to make computer chips. The company is sponsoring the CERN collaboration.

Heat decreases solar panel efficiency, “but unfortunately, solar farms tend to be built in the middle of the desert where water is in short supply, Verweij said.

The CERN technology provides highly accurate cooling over long distances and requires no refrigerants. Cooling all the world's solar panels by 10-percent would add enough energy to power 14.9 million homes. CERN technology can be used to cool data centers, batteries at wind farms and batteries in electric cars.

“If you look for technology where you expect to find it, you’ll never find something new,” Han Dols told the assembled teams.

Now that these teams have advanced to the next level, they need to recruit members to support their businesses.

On September 13, 15 and 18, there will be matchup events at HighTechXL, giving CERN teams the chance to recruit new co-founders, members and mentors as they prepare to start the 3-month accelerator program later this month.

And don’t worry … you don’t have to be a physicist to be part of an innovation team. They need marketers, designers and financial types also. You can find more information on those events here.

Startups have to present a bankable business case by 18 December, said Frericks.

That means a few weeks of work toward having:

• a business plan and financial model

• a supply chain and pricing structure

“You should be ready to talk to investors,” Frericks said.