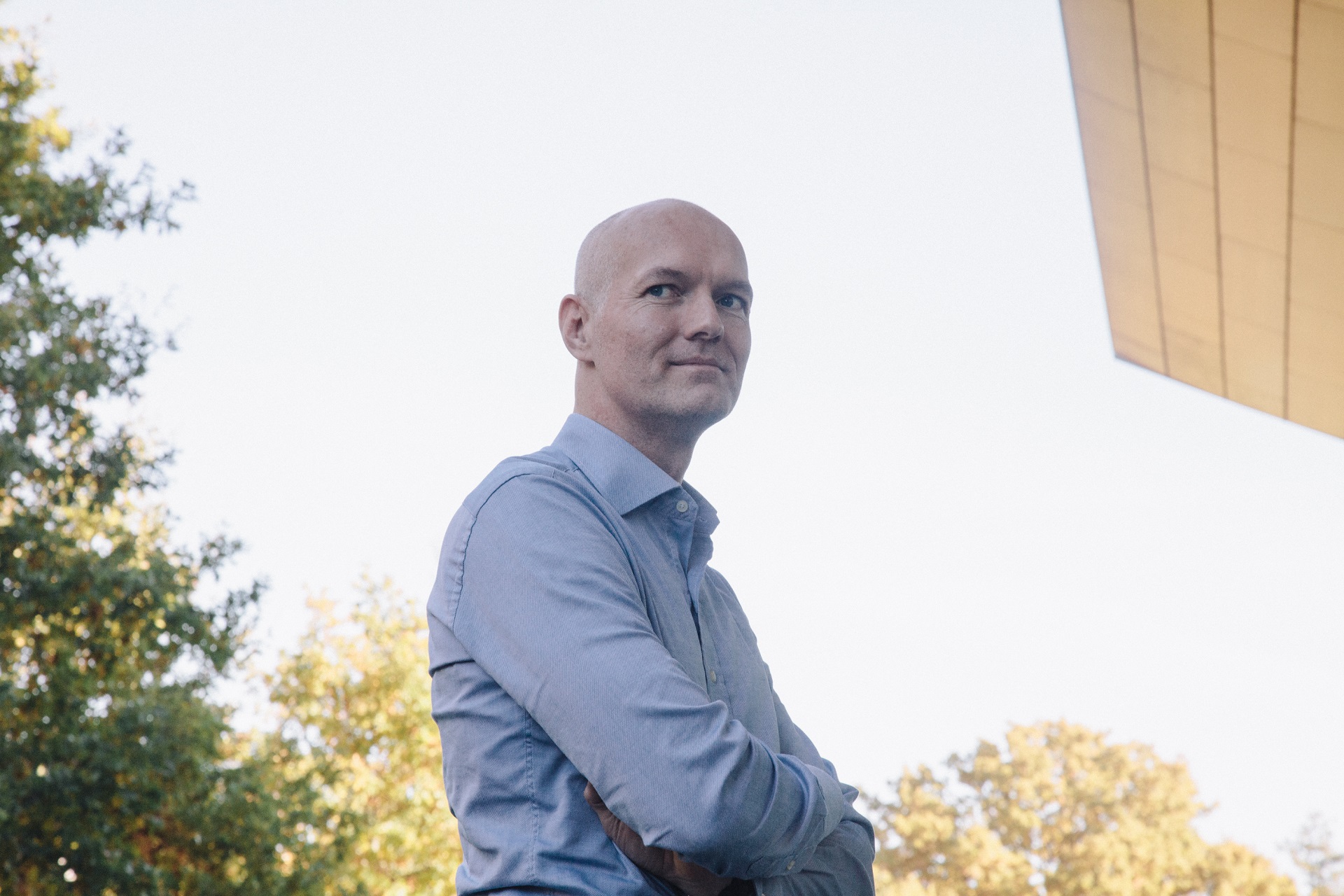 In this interview with BerkelBike CEO Rik Berkelmans, we learn that miracles are indeed possible. A devastating spinal cord injury has been the source of inspiration for a solution that has already had a positive effect on hundreds of people’s lives.

In this interview with BerkelBike CEO Rik Berkelmans, we learn that miracles are indeed possible. A devastating spinal cord injury has been the source of inspiration for a solution that has already had a positive effect on hundreds of people’s lives.

Imagine: You’re a bright-eyed and energetic teenager who’s into sports. You love posting YouTube videos of your unicycle and gymnastics tricks. You’re young and full of potential, and your whole life lies ahead of you. But one day it all goes wrong: You try a back flip on a trampoline, and land the wrong way. Suddenly your life is turned upside down: Your legs are paralyzed, your arms and hands have limited functionality, and you spend your days in a wheelchair.

This happened to Johnny Beer Timms when he was 16. After his accident, his muscles slowly wasted away in the wheelchair, and his life expectancy was immediately decreased by 19 years.

Johnny’s certainly not been the only person to suffer an accident like this. Spinal cord injuries happen to thousands of people worldwide every year – the World Health Organization (WHO) estimates this number to be between 250,000 and 500,000.

Many solutions exist to help spinal cord injury patients move from place to place (such as electric wheelchairs), but unfortunately, none of these solutions helps the patients regain muscle mass and physical fitness in their legs.

Meet Rik Berkelmans, CEO of BerkelBike. As an exercise physiologist, Rik knows how important it is for people to get enough physical activity. “A lot of us could use more exercise!” he points out. “But at least we have the power to choose whether we exercise or not.” He contrasts this with the spinal cord injury patients he comes into contact with at his practice. “If you’re paralyzed, then you don’t have the choice to exercise. You don’t even have the choice to use your legs.”

It’s possible to cause muscles to contract “artificially”, by stimulating them electrically. This method, called electrical muscle stimulation (EMS) can potentially be used both to strengthen healthy subjects and athletes and to rehabilitate injured patients.

Rik shares his experience with EMS. “Exercise physiologists can stimulate muscles in people with spinal cord injuries and then test the effects of that exercise. For science, this is really useful, but it doesn’t really help people with spinal cord injuries.” What the patients need is not just something that can both help them get from place to place, but also allow them to get some much-needed exercise.

“So that’s when I thought, ‘well, why don’t we make something with electrical stimulation that could really help them?’”

As Rik soon found out, other people have had the same idea. “When I went and did the research, I found that others had tried six times already to make a bike that uses electrical stimulation. But they all failed.” He delved a bit deeper into the literature, and discovered that they had all made the same mistakes. Essentially, the previous attempts had merely taken an existing tricycle model and made slight modifications. But as Rik realized, in order to provide a solution that really works for the target group, you have to start from scratch, with a new design.

“If you take a normal recumbent tricycle made for able-bodied people, and you just add electrical stimulation, that’s fine for a very flat surface and for a short period of time. But that’s not real life.”

So Rik thought, “Why not combine the action of the arms with the legs?” With spinal cord injuries, the central nervous system (CNS) is no longer connected to the legs, so even if the leg muscles are being stimulated, the patient’s heart rate may take a while to increase, and other body systems aren’t activated like they normally would be. Aside from the increased power output potential, adding the action of the arms into the equation also helps by putting the body into “exercise mode”.

The end result is an adjustable recumbent tricycle that works through the use of both the arms and legs. The arm crankset connects to the leg crankset through a chain, and when the patient starts cycling with their arms, it causes the legs to also start “pedaling”. A sensor at the leg crankset sends information about the position of the legs to a central electronic box, which then calculates which leg muscle needs to be stimulated. The central system then sends electric pulses to electrodes located in special shorts that the patient wears, thus stimulating the motor neurons in the legs. The bike can be used as a tricycle complete in itself, or as a removable attachment to a wheelchair.

Thanks to the BerkelBike, the paralyzed Johnny Beer Timms is now able to cycle up to three kilometers outdoors using only his legs. Rik describes this phenomenal transformation for his patients. “Some of our customers haven’t used their legs in 30 or 40 years and now they can use their legs for the first time again – that’s quite amazing.”

The BerkelBike is not only useful for spinal cord injury patients. “Thanks to the bike’s built-in arm and leg combination, people with MS, stroke victims, amputees, and people with brain injuries can use it,” Rik explains. “Otherwise, they would have to use a hand-powered bike or a wheelchair where they wouldn’t use their legs anymore. For these groups of people it gives great new possibilities.”

Their 400 customers are extremely positive about the BerkelBike, and it’s clear that it has great potential. It seems like a product that would “explode overnight”, being implemented in rehabilitation programs all over the world. But in reality, it’s not that simple. Getting the bike to be reimbursed by health insurance companies can be a challenge.

Rik describes his frustrations in this area. “I know for sure that the bike saves more for society than it costs. But it’s not always that simple. Private health insurance companies get compensated for a lot of the costs from people with spinal injuries. They get paid every time the person ends up in the hospital for a pressure sore [bedsore], for example.” Essentially, it works out better for the insurance company if the patient doesn’t receive a bike up-front that will save them hospital costs in the long run. Rik’s been trying to change this, but it’s a long process. “I have to deal with the Ministry’s reimbursement system and that’s quite complicated, and takes a lot of time.”

Another challenge for BerkelBike has been finding the right business model. According to Rik, HighTechXL has pushed them to re-evaluate and improve right from the start. “At the Impact Days I had to pitch my story over and over again, and got a lot of questions, and I came to the conclusion that I should change my business model from selling to renting.” This switch will hopefully make it easier for potential new customers to try out and eventually adopt the product. Rik plans to also offer more coaching, turning the BerkelBike into more of a service than a product.

“HighTechXL and workshops like the ‘business model canvas’ have helped a lot with that, to shape the business and to get a clearer picture of where we should go with it.”

I ask Rik what it’s like being an entrepreneur, and he purses his lips and exhales deeply. “There’s so much to do,” he says finally. “You have so many different tasks. I get questions about taxes and questions about electronics, software, mechanics, marketing and communications, website – every time it’s something else. If you’re a big company, you can direct those questions to the correct department, but for now it’s all me and Bjorn.”

The small size of their company relates to the third challenge that BerkelBike is facing: Awareness. “The product is still very unknown,” shares Rik. “People in rehabilitation centers (such as doctors, physiotherapists, and patients) know about hand-powered bikes and tricycles, but they don’t know that there’s something like the BerkelBike with electrical stimulation and all that kind of stuff. We’re a small company, and we have to tell the world that it exists, and that’s not that easy.”

Are you a marketing and communications specialist and were you inspired by BerkelBike’s story? Come and work for them to help them spread the word about the bike. Contact Rik at rik@berkelbike.com.