Amber Mobility: Highway To Freedom, Part 2: Introducing The Amber One 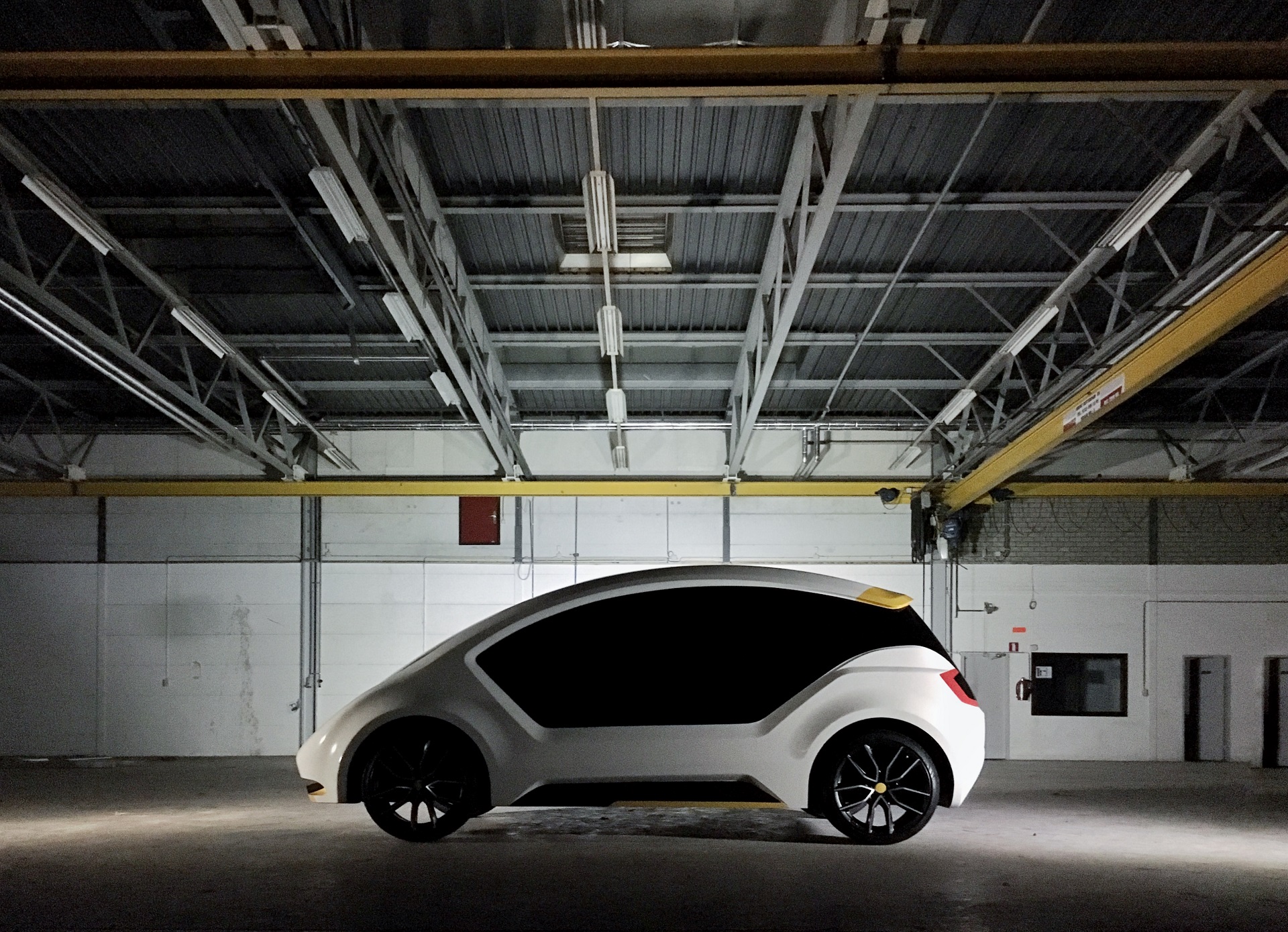 In our previous article on Amber Mobility, we introduced this young e-automotive company’s revolutionary idea that will change how we view car ownership forever: Guaranteed Mobility. But it doesn’t end there. It takes a special type of vehicle to become the best on-demand electric car. It didn’t exist yet, so they built it. In this interview with CEO Steven Nelemans, we introduce Amber Mobility’s first entirely modular, hyper-efficient electric car: The Amber One.

In our previous article on Amber Mobility, we introduced this young e-automotive company’s revolutionary idea that will change how we view car ownership forever: Guaranteed Mobility. But it doesn’t end there. It takes a special type of vehicle to become the best on-demand electric car. It didn’t exist yet, so they built it. In this interview with CEO Steven Nelemans, we introduce Amber Mobility’s first entirely modular, hyper-efficient electric car: The Amber One.

So What Does the World’s Most Efficient Car Look Like?

Weighing in at just 650 kg, the Amber One is the lightest electric car ever to be created. Its weight is what allows it to go 400 km (250 mi) on a single charge – a range that no other electric car of its size has yet been able to achieve. The car is also completely modular, which makes repairs and maintenance much easier and cheaper.

Anyone who says that electric vehicles are for grannies is most definitely mistaken.

Have you ever floored it in an electric car? It’s an experience not to be missed. I recently had the opportunity of going for what I jokingly called a “joy ride” in a BMW i3. It felt like a roller coaster – the force with which I was pressed back into my seat and propelled forward was incredible.

Amber Mobility is not shying away from the accelerator. As CEO Steven Nelemans tells me with a mischievous grin, in the Amber One, you’ll be able to go from zero to 100 km/h in just 7 seconds.

In the Beginning Was the Car

One of the first times I saw Steven was at a classy ABN AMRO Econic event, where he showed up drenched from his bike ride through the rain – typical Dutch, right?

When talking to Steven, you’ll be struck simultaneously by his energy and drive, and by his good-humored approach to life. As I ask him about his company, his eyes light up, and it’s as if his life depends on telling you as much as possible about Amber Mobility. I ask him about how the idea behind the Amber One came into being.

“A few of our members [Hans and Frank] were part of TU/ecomotive. We built our own highway-capable car there. In nine months, we thought of an idea – “we want to build a car” – and we built it. It’s called the Isa – it’s still the most sustainable car in Europe. We participated in the Shell Eco-marathon with it.”

At this point I interject. “But that wasn’t an electric car, right?” Steven quickly responds, “No, it was! I keep forgetting to say that. It’s just so normal for us to build an electric car.” Easy for you to say, I think. Steven has a very unassuming way of talking about doing big things. The world’s most efficient car? Sure, no big deal.

“When you convert the energy consumption to gasoline consumption, it was around 400 km on one liter of fuel,” Steven explains. “So it was a factor 20 more sustainable and fuel-efficient than the cars we have nowadays.”

They didn’t want to stop there, though. “The year after, Joep and I started with that student team, so we actually took over from Hans and Frank, and we also built our own car, and we took it further than just sustainability, because we wanted to make the car more practical.”

“We made the car completely modular,” Steven goes on to say. “Everything is interchangeable – battery packs, rear seats, and everything in the dashboard and also on the outside. In five minutes, we could actually tear the whole car down. A bit like the Phonebloks concept. This way, you can always optimize the car for certain situations so that it’s more practical and more user-friendly and even more energy-efficient.”

“After those two years in the student project we were thinking, ‘we really need to continue with that’. If we can do this as students in addition to our regular studies, what would happen if we could turn this into a company – like, really commercialize this, and work together with all the important automotive players that we have here in the Brainport region?”

And that’s exactly what they did.

Even though we’re told, “Don’t judge a book by it’s cover”, many industry experts might balk at the young age of many of the Amber Mobility team members. But the team actually finds its strength in its youth.

Steven recounts that when he was doing some initial validation of the idea for the Amber One among the professors and companies in his network, he often met with the response, “Well, if someone is going to do this, it should be you.”

The reason that they got this response is that if you want to create something truly innovative, it usually requires a complete mental overhaul. A return to square one; a blank slate. The problem is that our brains are wired in such a way that it’s extremely difficult to change our mental schemas – if you already have experience doing something one way, it’s hard to learn to do it in a different way. Experience is usually seen as an advantage, but in the case of the automotive industry, it’s actually an enemy.

Steven elaborates. “If you ask people to build a car who’ve been doing it already for 30 years, they will build the same car over and over again. But if you’ve never built a car, you will think and ask yourself, ‘well, what is a car actually?’ You start with the basics: It needs to transport us from A to B. Then you think, ‘what would I like a car to do?’ and you build it up from there. You end up with completely new ideas.”

The growing Amber Mobility team has managed to achieve a good balance between youth and experience, however.

The Future of Mobility

It’s not enough to create the world’s most efficient car. Even though electric cars are a good solution to the pollution issue, they don’t answer the mobility questions we’ll be forced to address in the future. Populations all over the world are concentrating into cities. Projections from the UN show that “[…] urbanization combined with the overall growth of the world’s population could add another 2.5 billion people to urban populations by 2050.”

The ingenuity of Amber Mobility is that it’s not just a car – it’s a mobility solution. Electric cars are great, but if they just end up in traffic jams or taking up space in parking lots, what’s the point? The future is not car ownership – it’s on-demand, guaranteed mobility.

The Amber One is not only the most efficient car; it’s the first car designed specifically to be shared. And the car is not the only thing that Amber Mobility is planning on sharing.

Steven says that the company’s goal is to drive innovation in the traditional automotive industry (pun intended). “Nowadays, a traditional automotive company will improve the fuel economy on one of their cars from 15 liters per kilometer to 16 liters per kilometer, and they think, ‘yay, innovation!,’” Steven laughingly relates. “We want to make sure that our car is an innovation platform, so that all those companies can have the power to use our technology to individually innovate.”

If you’re reading this article and thinking, “Finally! We knew it was possible,”  you’re not the only one. When Steven’s team took the first car they made to the AutoRAI car show in Amsterdam, they were surprised by the amount of attention they got. “People were actually coming to the AutoRAI to see our car. That’s because the idea did something with them – it made them think, and they wanted to see it. We actually got complaints afterwards from [major automotive companies] saying that we took all the press away from them.”

The market is ready. We’ve been waiting for hyper-efficient electric cars on demand. So let’s stop talking about how much we hate the pollution and the traffic jams, and do something about it. Join Amber Mobility in the revolution.

What’s in a name? Amber Mobility gets its name from the fossilized wood resin by the same name that you can sometimes find clinging to trees. As most scientists learn in school, the Ancient Greeks discovered static electricity (“the amber effect”) by finding that rubbing fur on amber caused an attraction between the two. In fact, the word electricity comes from “elektron”, the Greek word for amber.