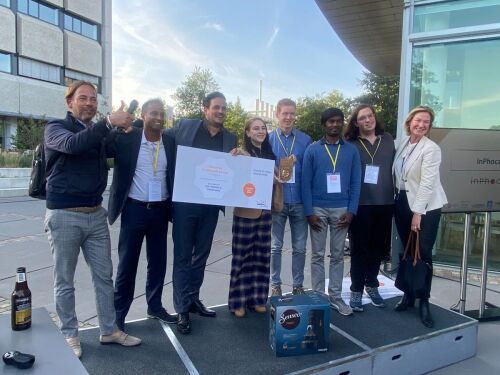 It’s been an exciting two weeks for deep-tech ventures as Alphabeats and inPhocal receive funding from DeepTechXL’s first investment round.

Alphabeats closed a €1.5 million investment round led by DeepTechXL and supported by LUMO Labs. The investment allows Alphabeats to focus on taking their patented neurofeedback technology to the next level and developing their digital mental wellness platform. With EEG, Alphabeats uses live neurofeedback to train the brain for high-level focus and performance.

The Alphabeats team came together at an early FasTrackathon (reverse-hackathon) and completed the HTXL venture building program in 2019. They received follow-on investment from LUMO Labs and entered their two-year venture building program in 2020. The team has been refining their business case and technology and running pilots during this time. They now focus on mental performance of elite athletes with the goal of expanding to other market segments.

“As a company, we have great ambitions and for that you need great partners. We all share the same big vision and are excited to combine forces to make a global impact in mental performance,” said Han Dirkx, co-founder and CEO of Alphabeats.

This is the first investment round of the €100 million DeepTechXL investment fund, which was announced earlier this year. DeepTechXL is led by HighTechXL founder and former CEO Guus Frericks.

Last week’s Level Up startup event ended with the startup BBQ and the Gerard & Anton awards, sponsored by Philips and Innovation Origins.

inPhocal was named one of the region’s most promising startups and received the Gerard & Anton award. As the inPhocal team accepted the award, Frericks joined them on stage and CEO Robert van Tankeren announced DeepTechXL was lead investor in a €2 million raise. TechInvest, the Brabant Startup Fund and the BOM are also part of the syndicate.

inPhocal has unique laser beam technology they say will revolutionize laser printing. The inPhocal laser has a focal depth 400 times longer than conventional lasers, and it can print on curved surfaces. This could potentially eliminate the need for using ink jet printing to print expiration dates on everything from bottles and cans to fresh produce. Ink jet printers are not environmentally friendly and are expensive to buy and maintain. Replace ink jet with inPhocal’s technology and you get 2.5 times faster production, seven times larger print area and no waste. The team has laser marking pilots with commercial partners on the books.

inPhocal will use the funding to increase production of their machines in Breda and to install units in customer manufacturing lines worldwide.

“DeepTechXL shares the vision of inPhocal to make an impact on the grand societal challenges of today by eliminating ink from the food & beverages industry. DeepTechXL will use its deep-tech knowledge, expertise and network to support inPhocal in scaling up.”